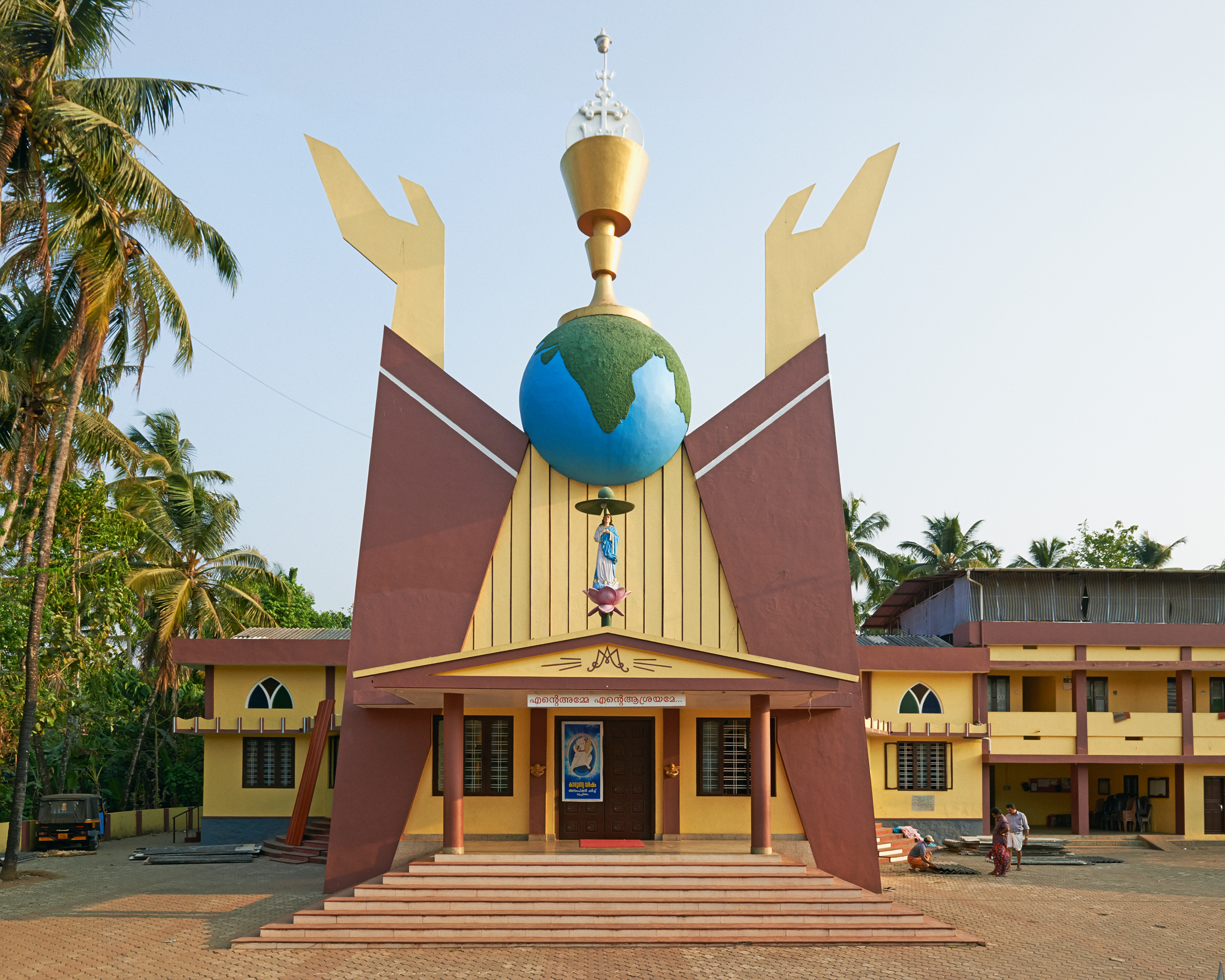 Most church buildings in Kerala are built in the style of the Portuguese Baroque, which even today is still used for some new buildings. However, after independence in 1947, the Indian church wanted to liberate itself from the constraints of colonial architecture and to develop its own architectural style. This search for an identity of their own can be seen on the facades of the buildings.

Apparently The Syro-Malabar Church in Kerala wanted to give expression to progressive thinking, but it did not follow the formal canon of modernity, as happened in parts of North India through the influence of Le Corbusier. A modern way of thinking manifested itself in avoiding traditional styles and materials: Instead of laterite stone and wood, it was built with reinforced concrete, which allowed a completely new, very sculptural formal language in which Christian symbols were translated directly into three-dimensional, monumental forms.

For example, the Assumption Church in Mupliam (Church of the Ascension) consists of monumental hands cast in concrete pointing to the sky. The church becomes a body, instead of the head there is a globe on which India is displayed disproportionately large. Above it sits a chalice, symbol of the Eucharist. Other signs from the Christian iconography are translated into architecture, such as the dove, symbol of peace, freedom, and the Holy Spirit, or the burning candle as a symbol of eternal light and transience. The façade of the Church of St. Rita consists of the two letters Alpha and Omega, symbol of beginning and end, of the all-embracing God and of Christ. Monumental letters also form the façade of Our Lady of Miracles, only at second glance can the word PAX be deciphered. The St. Joseph‘s Chapel, however, is built in the shape of a pointed star. A Christian interpretation for the corners of the pentagram are the wounds of Christ. Particularly unusual is the church of St. Theresa, which has the shape of a walk-in ship with Jesus Christ on its bow. The ship is an old symbol of the church itself, with the mast representing the cross. At the same time, the ship is a symbol of human life.

The direct translation of Christian symbols into three-dimensional forms is very unusual for the Western view. The question arises whether the visually stunning iconography of Hinduism has an influence here. Sometimes Hindu stylistic elements are also directly adopted, such as the lotuses with a statue of Mary on them, or the metal pillar in front of many churches, which is called Kodimaram in Hinduism. Also the intense colors of the buildings can be seen as an influence of Hinduism.

In this context, one must also remember that Christianity in India has a very long tradition. According to legend, in the year 52 the apostle Thomas came to India, to whom today‘s Thomas Christians refer. They form the Syro-Malabar Church, which is dominant in Kerala. Historically verifiable are Christian communities in India from the third century. When the Portuguese arrived by sea with Vasco da Gama in 1498, they were astonished that there were already hundreds of Christian churches there.

The photo series shows the unusual architectural style of the Syro-Malabar church buildings in the postcolonial era. In the typological sequence of these buildings, multi-layered processes of cultural influence and an idiosynchratic architectural language become apparent.

Haubitz + Zoche was a collaboration of two German artists: Sabine Haubitz (*1959) and Stefanie Zoche (*1965). They worked together from 1998 to 2014, when Haubitz passed away. Zoche continues the work in her own name.

Exhibition is supported by Lithuanian Council for Culture.