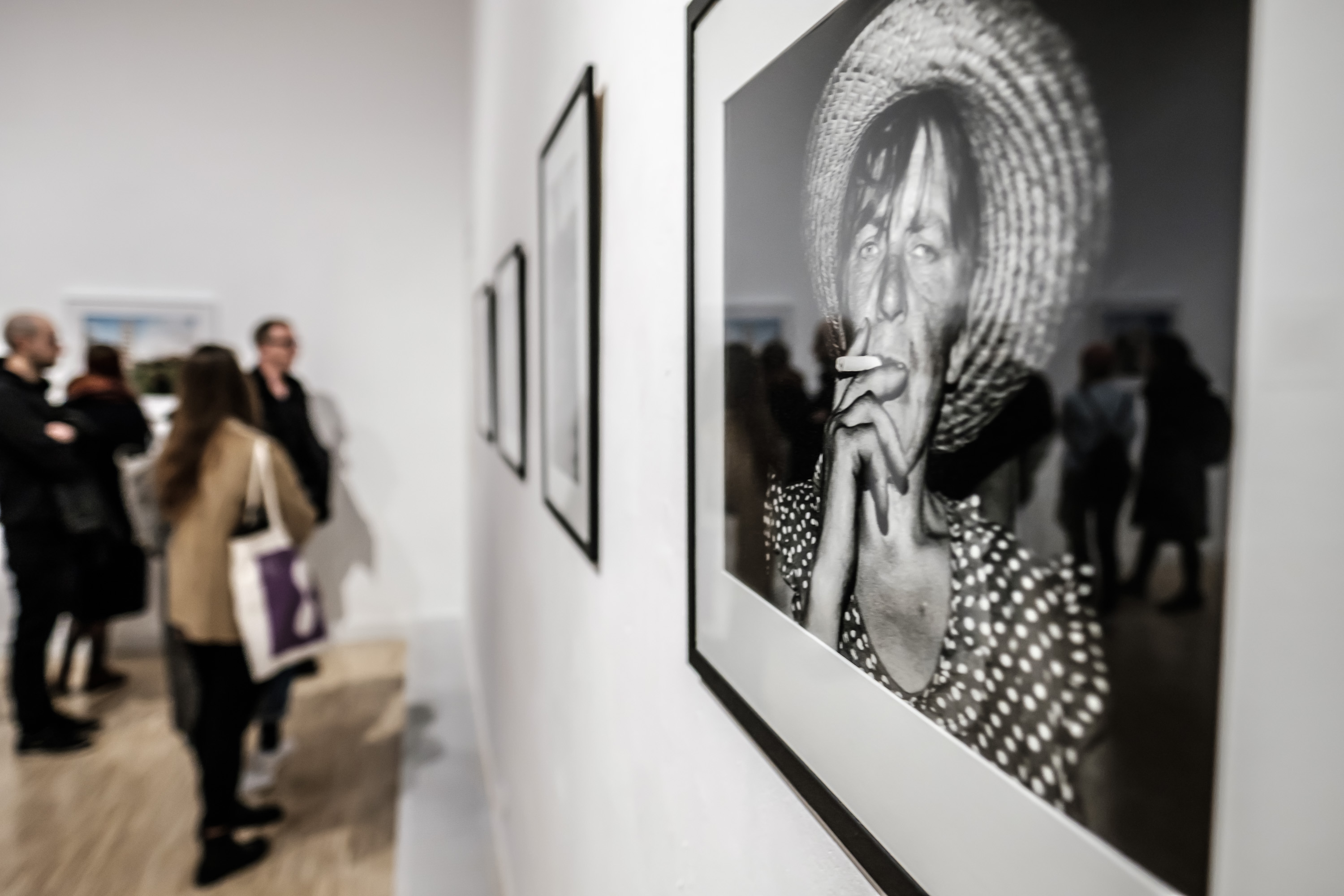 One exposes the social policy of the West, the other one – that of the East. On the one hand, there is trash, ice cream and fast food; on the other – squalor and alcohol consumed in excess. British mediocrity versus Lithuanian originals. The Parr-Vikšraitis duo on show in Poznań until December 10.

Both are masters of social photography. The Great Ones. One of them represents a major agency: Magnum Photos. This is Martin Parr, in the Arsenał, with photos from the 1970s and the 1980s where he still practiced this truly social photography, laying bare the everyday grotesque of a consumer lifestyle. The other’s greatness is of a completely different sort, in spite of the misery of the place that he keeps on photographing and in spite of his own physical frailty. Rimaldas Vikšraitis, despite his speech impediment and the rigidity of his hands, takes pictures as strong as cannonballs, somewhere in the far-flung Lithuanian province.

He was discovered there by the head of the Lithuanian Photographers’ Association, Aleksandras Macijauskas, while Antanas Sutkus, the aged and famous member of the Association, introduced him to Parrow. It was Parr who decided to show Vikšraitis’ photos in Arles. It was in 2009, but the show itself was prepared by Gintaras Česonis and, as he wrote to me, this was a godsend. “I was accompanying his entry into the Arles community from the very beginning.” It all began from Arles, then. This is where Vikšraitis got both the Discovery Award and invitations for other exhibitions. The concept of “The Real World”, which we can see at Arsenał Gallery, was, naturally, created by Česonis, the owner of a gallery and a magnificent publishing house in Kaunas. He presented the photographs at last year’s first XPRINT Photography Book Festival. Among the generally outstanding publications, Česonis showed “The Real World”, an amazing two-volume album with photos by Vikšraitis and Parr (you can buy it at XPRINT). Michał Sita of Pix.House, the XPRINT organizer, is the Polish curator of the Poznań exhibition.

The Arsenał Gallery has not recently seen an exhibition where the space of the big room on the first floor would be so well divided and the show itself would exert its impact right from the entrance. The massive blocks which are thrown diagonally onto the center of the parquet floor have energised the interior. These blocks both helped create some aisles and additional exhibition place and made it possible to present in the centre of the gallery two magnificent enlargements of photographs, one per each photographer. These enlargements are like the tolling of bells. A young girl with a perm, photographed by Martin Parr behind the counter of an ice cream parlor in New Brighton, crushes us with a sightless stare emerging out of a strong make-up. What is it you want? You are no match for me. I’m waiting for someone who will have my photo published on the cover of Vogue, not for some documentalist!

Parr’s pictures have as much in common with a colour magazine as this colour. Thanks to their colours, however, they are in stark contrast to the black and white photographs of Rimaldas Vikšraitis. This has a double impact when you look at the large-format “entrance” photograph by the Lithuanian artist. Its topic is drinking and fondling under a moldy wall. The wide perspective applied by Vikšraitis for an unappetising scene from a cramped kitchen does not crush you, but makes you part and parcel of the degradation process it illustrates.

The contrast is sharp in every respect. Parr offers luminous sets from the beaches of the “The Last Resort” series and unmasks the absurdity of tourism (“Small World”). He shows people sunbathing on the concrete pavements of New Brighton, lining up to buy ice cream from kiosks, eating out of packets abandoned by those who had been there before them, as if the aesthetics of leisure and of life were completely alien to them. Moreover, the photographer represents human crowds ticking off “organized” forms of sightseeing; these people look as if stripped of their own initiative, personal goals and individual needs. These are caught by exactly the same snares of consumerism that the Poles were trapped in twenty years later. Perhaps that is why you do not so much want to look at what he photographed and prefer the Lithuanian’s pictures instead.

Vikšraitis exhibits a joyful despair, the absurdity of the collapse of his world. When he talks about it, it sometimes matches Parr’s paintings: “We live in shit, which is everywhere around us, but we are either not ready or do not want to admit it.” The Lithuanian, however, is sentenced to a painful observation of the reality of the East rather than of the West. He sees families or entire rural communities dying in alcoholic binges. “I want to tell their story and I want them to depart to the accompaniment of music,” he says. Sita let Vikšraitis talk during the Poznań exhibition. In the show’s annex you can watch the movie he shot in the gallery in Kaunas. The figure of the photographer, what he says and how he says it, along with his pictures, are indeed shocking. Not the way you are shocked by the images of catastrophes, destruction and war, but through the ability to speak in a humourous way about the fall of man. Photographs tell you stories: Vikšraitis shows people who unabashedly take off their pants and women in lingerie, their breasts pulled out of their bras; these people are sometimes naked, showing tender emotions to each other only; but more often than not, they act out lewd ​​and drunken scenes; they drink alcohol in whatever they can, laugh or only smile; the table behind them has a crooked leg, the paint on the walls is flaking, the animals either enter the kitchen on their own or they carry them in themselves … All the scenes are orchestrated by Vikšraitis. “Sometimes it’s a simple exchange; it so happens that people need a drink to sober up after a hard night and I need good photographs,” he says.

He also shows the slaughtering of swine and biting off a hog’s ear. Yet he equally easily switches to an almost lyrical mood: a woman huddled under the stove with the cat, a melancholy face of a boy behind a window pane… The thing is that there is a recess in front of this window, in which you can see a goat’s head, freshly cut off. “My goal is to tell a true story about these people’s lives. No lies,” he explains. He does not judge them. “I have respect for everyone I have photographed. I do not laugh at these people or mock them.” This is exactly what you see in his pictures. It is probably the ability not to compromise the dignity of his protagonists, the people he assigns roles to in grotesque situations, that makes such a powerful impression. This photographer has conveyed in his work a fundamental message, that of respect for every human being. As a person with disabilities, he is probably more sensitised to it. There is one more blown-up photograph by this photographer at the exhibition. A Surrealistic scene, indeed: a nude person is carrying a tub out of which a stork is sticking out. “When I have an idea, but do not have a model, I use myself. I have been a model for my photos not because life or the world are beautiful. I wanted to tell about my life, which is so much different.”